The Butterflies and Moths of Blue Maples

Few among us can resist pausing when a butterfly flutters past our gaze. For that fleeting moment, we are witness to the mysterious Archetype of Metamorphosis. Over the centuries, the butterfly has 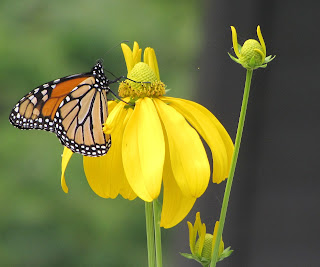 come to symbolize the most profound physical journey of change leading to the inescapable transformation of form and consciousness.


After lamenting the decrease of bird diversity last year at Blue Maples, I noticed that there were an abundance of butterflies and moths in the gardens. Realizing how little I knew about them, I embarked on a project to identify as many as I could. I am not an expert by any means. In fact, I was once lightly chastised for posting a moth to the Butterfly Gallery on Google+. So if I got a few wrong, chalk it up to the subtle nuances of species identification.


To the ancients, butterflies were an emblem of the soul and of the unconscious attraction towards light. Aristotle gave the butterfly the name 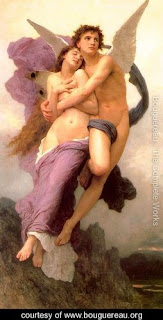 ‘Psyche’, the Greek word for soul. In art, Psyche is often depicted with butterfly wings. Winged references also abound in Literature. To the poet Robert Frost, butterflies were ‘flowers that fly and all but sing’. Victor Hugo saw them as harbingers of tragedy transformed and were, ‘torn love-letters that through the sky, flutter and float and change to butterflies".


Cross-cultural references to butterflies exist around the world. To the Blackfoot Indian, the butterfly were carriers of dreams innate with news relayed to us when we fall asleep. In China, butterflies were used as symbols of conjugal bliss and joy. Psychoanalysis also regards the butterfly as a symbol of rebirth. For some, butterflies were not always considered the messengers of good fortune. In the Old World, butterflies sometimes had more negative connotations and thought to be spirits of the dead. Sailors believed that if they saw a butterfly prior to embarkation, they would die at sea. In Gnostic art, the Angel of Death is depicted crushing a butterfly underfoot - for the butterfly’s attraction to flame and light symbolized purification by fire.


Today, scientists study butterflies as key indicator species to tell us about the health of our planetary ecosystems. Environmentalist Mary Colwell, author of the book: John Muir – the Scotsman Who Saved America’s Wild Places, wrote that butterflies are one of the world’s greatest pollinators, along with bees and a host of other insects. Butterflies are so sensitive that just the addition of a chemical to the air, or pollution in the water, or loss of habitat can dramatically affect entire populations.


Did you know that butterflies must be warm to fly? They need body temperatures close to ours for proper flight. That is why we often see them basking in the sunlight with open wings and angling their bodies toward the sun to increase their body temperature prior to take-off. Once they are up and fluttering, their flight muscles provide enough heat to keep them going.

bodies and wings to aid in capturing solar heat. This Mourning Cloak (nymphalis antiopa) named for resembling a traditional cloak worn "in mourning" is an early Spring visitor. The rich maroon colour of the upper surface of its wings glisten in the sun. To me the Mourning Cloak looks like a delicious chocolate butterfly!


Then there are those beautiful Blues! The Northern Blue (plebejus idas) is a small North American butterfly with bright silvery-blue to purplish-blue wings, outlined with a narrow dark border and a white 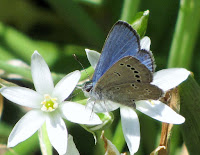 fringe. This species will often ‘mud puddle’ - drink up minerals from damp ground. It also has a symbiotic relationship with ants. Larva are attended to by ants, which protect them from flies and wasps. The larva secretes a drop of liquid high in sugars and amino acids that the ants then collect.


The Woodland Skipper (ochlodes sylvanoides) are a lovely, tawny colour. When they fly they look like miniature furry jets zipping 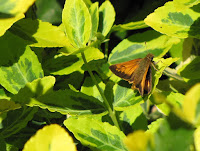 about. This skipper is found in virtually every kind of open habitat, including woodland clearings.


The White Admiral (limenitis arthemis) is a common and abundant species. Roadways and clearings in wooded areas are where they 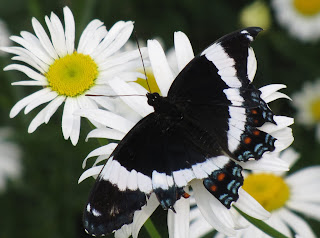 are most often seen.  Its cousin, the Red Admiral with bright fire-colours on black wings slashed with crimson - inspired images of an inferno hell to the ancients.

The velvety Northern Crescent (Phyciodes cocyta) is lovely to watch. The etymology of this species name is derived from the Greek underworld river "Cocytus" – the river of lamentation. It is linked to Socrates, who on 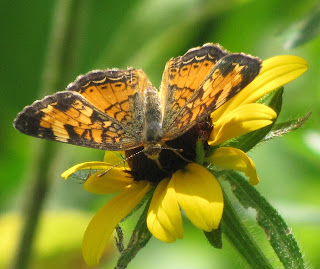 trial, beseeched his fellow citizens to do right by their country.


I noticed this Little Wood-Satyr (megisto cymela) resting on a climbing vine. It is found near woods or shrubby areas and its flight is bouncy. This greyish-brown butterfly with 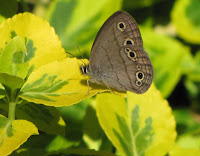 rounded wings has two dark eye-spots on each wing, and has a tiny third spot on the hind wing. The spots contain two tiny metallic grey pupils. I could see these metallic eye spots reflecting in the sun. 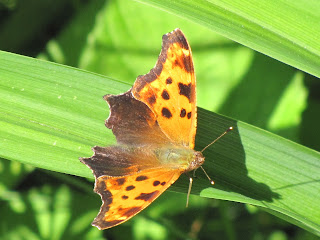 
The Northern Pearly-eye (enodia anthedon) is soft brown in colour above and below, with slightly scalloped wing margins. The hindwings have five similar spots above and six beneath; 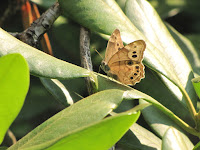 the last one on the underside has a double pupil. Unlike most other butterfly species that prefer clearings and woods edges, this butterfly is one of the few truly shade-loving butterflies in Canada and is found in deciduous or mixed wooded areas like our forest.


The Canadian Tiger Swallowtail (papilio Canadensis) is the only member of the worldwide Swallowtail family to live this far north. Its size and distinctive pattern of a 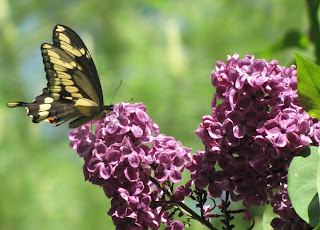 yellow ground colour with wide, black tiger stripes is easily recognized. The Canadian Swallowtail body has layers of soft velvet-like hairs, always tempting me to want to pet it like a cat.


The West Virginia White (pieris virginiensis) has wings that are almost translucent with light greyish-brown veins that create delicate lace-like butterfly wings. This photo shows them
coupling. There is some concern over the long-term survival of the West White Virginia that 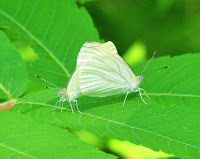 prefers rich, moist deciduous woods. Since it refuses to cross open areas, forest fragmentation is the largest threat to this butterfly's survival.
In summer, we see many yellow butterflies of the Sulphur family pollinating flowers. Their capacity to camouflage is stunning! One

can barely see this Pink-edged Sulphur (colias interior) on this yellow cone flower!

The Monarch (Danaus plexippus) butterfly displays a pattern of behavior that’s unique among all insects. Its long-distance 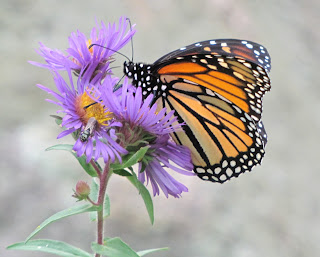 migration is one of the world’s great natural wonders and now considered an "endangered natural phenomenon." The scope of this migration resembles that of many bird species. While climate change appears to affect their arduous journey, efforts to correct human error in interrupting this natural migration is ongoing. This includes awareness campaigns, banning the use of certain pesticides, restoration of habitat along the way, replanting of milkweed, and the protection of Mexican breeding sanctuaries.


Do you know how to tell if a Monarch is a male or female? While males are slightly larger than 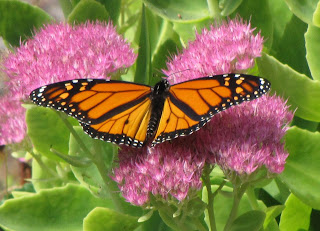 females, they also have a black spot on each hind wing that is made up of specialized scales, possibly used to emit pheromones to attract females.
Moths are the night shift of the Earth's pollination industry. Long after bees and butterflies have gone home for the night, most moths are out there sipping on nectar, spreading pollen from plant to plant, or banging around your porch light looking to mate.


While walking in our forest, we found this Cecropia moth (hyalophora ceropia) which is North America's largest native moth. This one measured 5.5 inches or 13.97cm. It was a 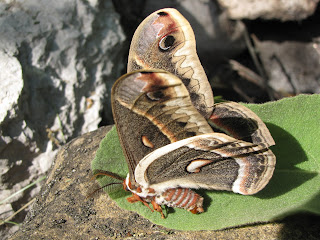 male moth as indicated by its extra feathery antennae. To find a mate, the female emits pheromones and the male’s sensitive antennae can detect this female magic for more than a mile away! They mate in the early morning hours and can go all day. Unfortunately, this moth was dying, probably after a bout of vigorous mating, which at least half of the human population would agree, is a rather good way to go.


When flying through the air with its charcoal grey outer wings, the Virginia Ctenucha moth
(ctenucha virginica) looks like a small Darth 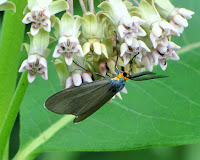 Vader helmet. But once it lands – Bazinga - it reveals a metallic turquoise body, bright orange head with tufts of yellow hair and feathery antennae. This common and widespread critter proves once again that you can’t tell a book by its cover, nor a moth by its flutter!


Is it a bird? A bee? A hummingbird? Nope, it’s a Hummingbird Clearwing moth (hemaris thysbe). As a primary pollinator, this 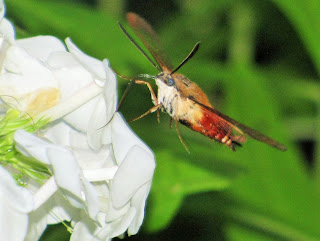 moth sips nectar by hovering in front of the flower the way a
hummingbird does, rather than like a bee which lands on the flower itself.
So these are but a few of my ethereal visitors that have kept me spell-bound in appreciation of the amazing designer of the natural world.
In closing, I often think about the query on transformation by John Harricharan. 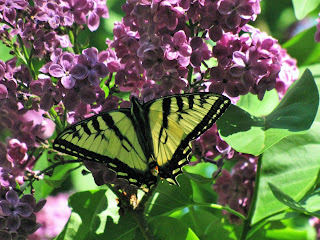 they are but one.

So when I die, it will be that I have been transformed from the caterpillar of earth to the butterfly of the universe."


Posted by Unknown at 11:10 No comments: Links to this post