Wild Raccoons and the Wildlife Rehabilitators Who Love Them

For the wildlife connoisseur, the raccoon is probably one of the most intelligent and beautifully-designed animals to observe and ponder. Who has not played a game of wits 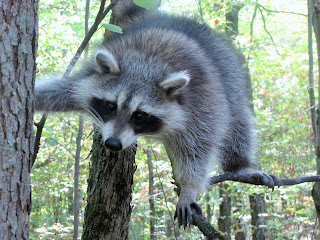 with a raccoon over a simple thing like securing your garbage pail? Or perhaps tried to thwart its intent to set up a den in one of your garden sheds or your attic? While this game of matching wits has caused humans inordinate amounts of stress – for the raccoon – it’s like going to pre-school, further developing their brain and manual dexterity.


According to the Nature of Things by David Suzuki, biologists have noted that like humans and primates, the raccoon is unique among species for certain abilities. It seems that their rapidly developing intelligence has put them on a fast lane of evolution. This fast track has much to do with the fact that raccoons are adaptable to change and will eat almost anything, just like humans. They continue to develop tremendous manual dexterity – mainly by figuring out the puzzles we unwittingly give them as we batten down the hatches and barricade our food wastes.
One of the things that distinguished humans from many other species was the design of our 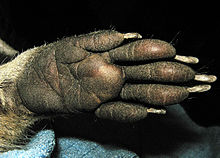 hands. The development of the thumb, an evolutionary marvel, took Nature about a million years to perfect. Have you had the chance to look closely at a raccoon’s hand sporting a very effective thumb-like digit? They have four of them. If you haven’t started already, this is where you begin to ponder.

Ever wonder how a raccoon can fit into such small spaces? When fully grown, they are not exactly Tiny Tim. Well, if the little rascals didn’t up and evolve the ability to collapse their spine! It’s one of the first things a mother raccoon teaches her kits when they go out exploring. Soon, the smallest opening in a shed door or roof eave can be easily accessed. So as not to be outdone, the other day I tried to collapse my spine to fit into the size 10 dress I use to wear before having a baby - but alas to no avail.


Leaving this path of unnerving inquiry about who’s who on the fast lane of evolution, let’s look at the raccoon coat. The colouration of the fur is beautiful and so symmetrical. Talk 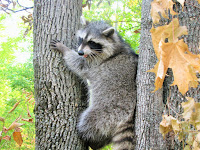 about many useful shades of grey, with the stripes strategically melting into the shadows as they slip unnoticed through a forest night. They don’t hibernate, but with fat reserves built up over the summer, they can withstand a cold winter with little food. And that iconic robber mask designed perhaps to taunt us? Raccoons may not be capable of stealing our place on the ladder of evolution – but they can sure make us move over and share a rung or two.


Like humans, raccoons are social animals. The females will den collectively with other females and nanny babies together. The males travel and live together until mating time brings them to females. Baby raccoons, or kits are very tactile and use their hands to feel out their surroundings. The soft skin on each palm of their hands 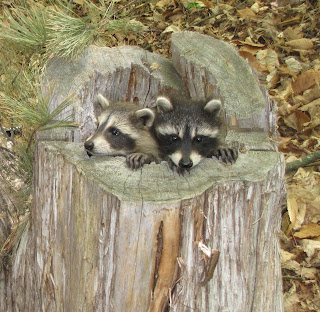 contains hundreds of sensory glands. It is fascinating to watch a young kit use a kneading-motion hand manoeuver, slowly sensing and identifying objects in their environment. Did you know that raccoon babies purr just like kittens when content?


Raccoons are not endangered and with better food sources have a healthy population base in urban areas, albeit less so in the country. So why do we need Wildlife Rehabilitators for raccoons? Simply because as history has often illustrated with species after species, things can change, real fast. Humans kill many raccoons deliberately – seeing them as an unnecessary nuisance. Or many are killed on our increasing roadways. There are ongoing ‘culls’ in urban areas to reduce their numbers, while human civilization continually confiscates the natural habitat upon which they need to survive.


Wildlife Rehabilitators are certified by provincial governments and authorized to care for wildlife in distress until they can be released back into the wild. In the spring, when many parent animals meet an untimely death, the wildlife centres are filled with baby animals, including many raccoon kits. Motivated by love and respect of the species they specialize in, Certified Wildlife Rehabilitators are the unsung heroes, volunteering their time to try and keep balance within a natural system so often decimated by thoughtless human acts of plunder.


One day, a very sick raccoon wandered onto my property. I called Lisa Peterson, the local Certified Wildlife Rehabilitator. She determined it had advanced distemper and unfortunately needed to be put down. Later, I asked her why she cares for these wild creatures. In 2000, 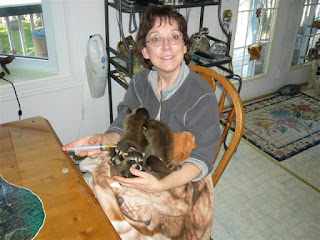 Lisa came home from work and found two raccoon babies on the side of the road – the mother had been killed. She took them to the Sandy Pines Wildlife Centre in Napanee, Ontario and met the founder, the formidable wildlife crusader Sue Meech. Lisa volunteered to feed them and learned more about the species. She proceeded to get her wildlife rehabilitation license from the Ontario Ministry of Natural Resources (MNR).


Each year, Lisa gets many abandoned raccoon babies to nurture – anywhere from 8 to 12 at a time. A visit to the Peterson home is like walking into a Dr. Doolittle movie set. As volunteers, improvisation is paramount, and her husband Laurie builds the most amazing cages. The first cage was an old truck cabin fixed up as a cage. Laurie then got an old trailer and renovated it. Famously called the ‘Coondo’ - it is a bee-hive of activity in the spring and summer.


Raising baby raccoons is labour-intensive and Lisa is up for their 3:00am feeding for months on end. There is also extensive administrative work as MNR can inspect the "Coondo" at any time. Lisa must keep clear records on each baby, i.e.: recording it’s overall health, weight gain and treatment received. Before release, the raccoons are taken to a wildlife vet and given the appropriate shots for distemper and rabies. 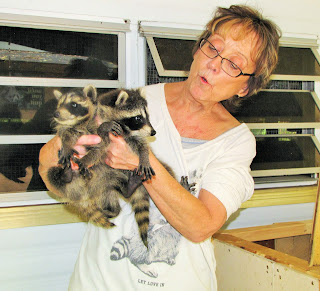 attending to a creature deemed valueless and a throw-away nuisance. ‘What you do to the least of them’ comes to mind.
A word of caution. Raccoons do not make successful pets. In fact, in Canada it is illegal to do so. Raccoons, once matured, want to be with their own kind. While cute when young, the raccoon will morph into powerful adults that are extremely cunning, wild and solely-focussed on their survival and propagation.

Ever witness a raccoon release? Enjoy the video at: https://youtu.be/ML-ffJ2qaW8

Posted by Unknown at 23:42 No comments: Links to this post