Our beautiful Bella Layna went from 12 to 35 pounds by the time she was 15 weeks. As a young, 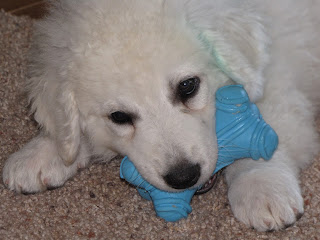 growing puppy, she loved to wrestle and tackle anything that moved. Since I was the only one
around, I was considered target practice. With the big brown eyes of an angel, she would calmly await my arrival around any corner - and then pounce. I later learned that as a guardian dog, the first instinctive move of a Kuvasz was not to bite, but to use the strength and power of their weight and shoulders to knock a predator off-kilter, and back behind a safety perimeter.

But that first summer, I was just trying to figure her out, often muttering to myself that my Bichon Frise never tried to take me down. I reasoned that Layna obviously lived in a rich puppy fantasy world, not unlike a child. I remember my own young son always wanting to wrestle too. He used to claim that he was the strongest. Of course being the sly female that I was, I would always agree with him. One day, when he was about three-years-old and hollering his battle cry of: ‘I am the strongest mommy’, I quickly replied, “Yes dear, but smell isn’t everything”. Hearing this, he collapsed on the floor in gales of laughter. Together we shared one of those spontaneous moments of joy over silly humour that easily rivalled a Monty Python skit. Those times of joy are indelibly etched in my memory to this day.


But back to the dog. I wondered whether Layna pretended that I was some great predator about to go 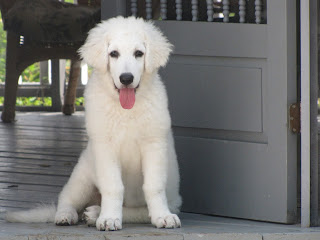 after her toy chicken – and must be taken down. Lightbulb – it's dominance behaviour – and time for puppy training! I registered her at the local dog training facility, and was told that she was the youngest one of the group, but she would eventually learn by watching the older puppies. Of course, as I had registered her over the telephone, the trainers had not actually seen her. When we walked into the training room, there was a bit of a stunned silence. It was evident that while Layna was the youngest, she was by far the biggest puppy in the class. The following is an account of her first day in puppy training class.

Picture a large training room with easy-to-clean floors. A selection of different types of dogs from retrievers, mutts, to golden doodles to whippets, all smaller than Layna, except for maybe Coco, the chocolate Lab. Owners are asked to form into a large circle. Picture myriad dogs wriggling and writhing about - all doing various imitations of ‘get me outta here’.

Coco: the chocolate Lab straining at his leash throughout the class, eyes fixated solely on Layna. 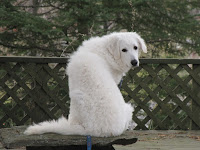 Layna: standing coolly off to my right side, about ten feet away from the panting Lab. Despite his antics, she doesn’t even give him a passing glance, and stares at the instructor.

The Instructor teaches about clicking and reward method, and chooses to demonstrate with every dog in the class, except Layna. Is it because of Layna’s sharp, puppy teeth? The teacher cryptically states that she wants to be successful in her demonstrations.  Huumm... Layna sits quietly, intently watching 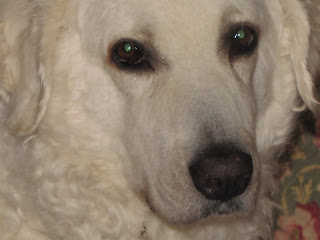 all the other dogs. At times, she appears to sleep at my feet, perhaps giving rise to the inaccurate assumption that she is calm.


With the help of a few cookies, Layna completes an array of first class challenges. She likes the clicker as it is now associated with a treat.

The class comes to an end, and owners and puppies file out of the area, except for me and the couple with the chocolate Lab. Coco is still straining on his leash, eyes focussed on Layna as we approach the exit gate. The woman leaves Coco with her partner, and comes over to us. She asks about what breed is Layna, and comments that she is so very white and fluffy. ‘Yes, she’s a real puff girl,’ I replied, ‘but as a Kuvasz, Layna is classified as a guardian breed’. The woman paused for a moment and said, ‘Well, she sure doesn’t seem like a guardian breed as she didn’t even bark during class!’ Meanwhile, in the background, Coco is now hyper-ventilating, straining to join his owner. So I casually suggest that she let her Lab off the leash, and we let the two dogs play.

Leashes off, Coco bounds quickly toward us and heads for Layna. In one swift move, Layna grabs him by the ruff at his throat, flips him over and pins him onto his back on the floor. Coco submits, but Layna is not yet finished with him. She quickly straddles him and with her front paws, pins each of Coco’s shoulders to the floor. Next, she goes nose-to-nose with the hapless Lab, and pins his head to the floor. Then, with an almost a visible smile on her lips, her tail slowly begins to wag. My little lady then turns around 180 degrees, and rubs her butt in his face. Coco’s pickle emerges as he lays blissfully on the floor. A quick jump off and Layna walks away to her stunned owner, who quickly gives her a cookie, without using the clicker.

Thus ends Layna's first puppy training class. No doubt, somewhere in the County, a chocolate Lab anxiously awaits for his next training class! 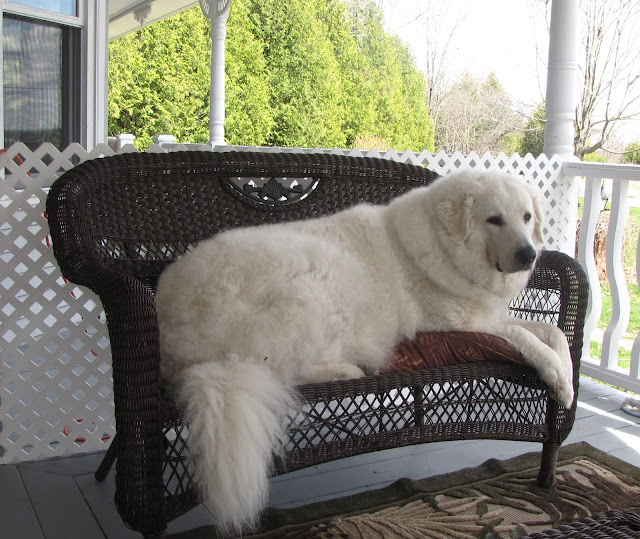 Today, our trained guardian of Blue Maples, Bella Layna rests peacefully on her two-seater couch. She may still give the illusion of calmness - but is watching for the squirrel that tries to steal seed from the bird-feeder. Whatever you do if you visit, call ahead. And please don't mention the 's' word in her presence.

Posted by Unknown at 18:52 No comments: Links to this post