Choosing the Dog for Blue Maples

Before retiring each evening, we tell our dog, Bella Layna, the bed-time story of why we choose her 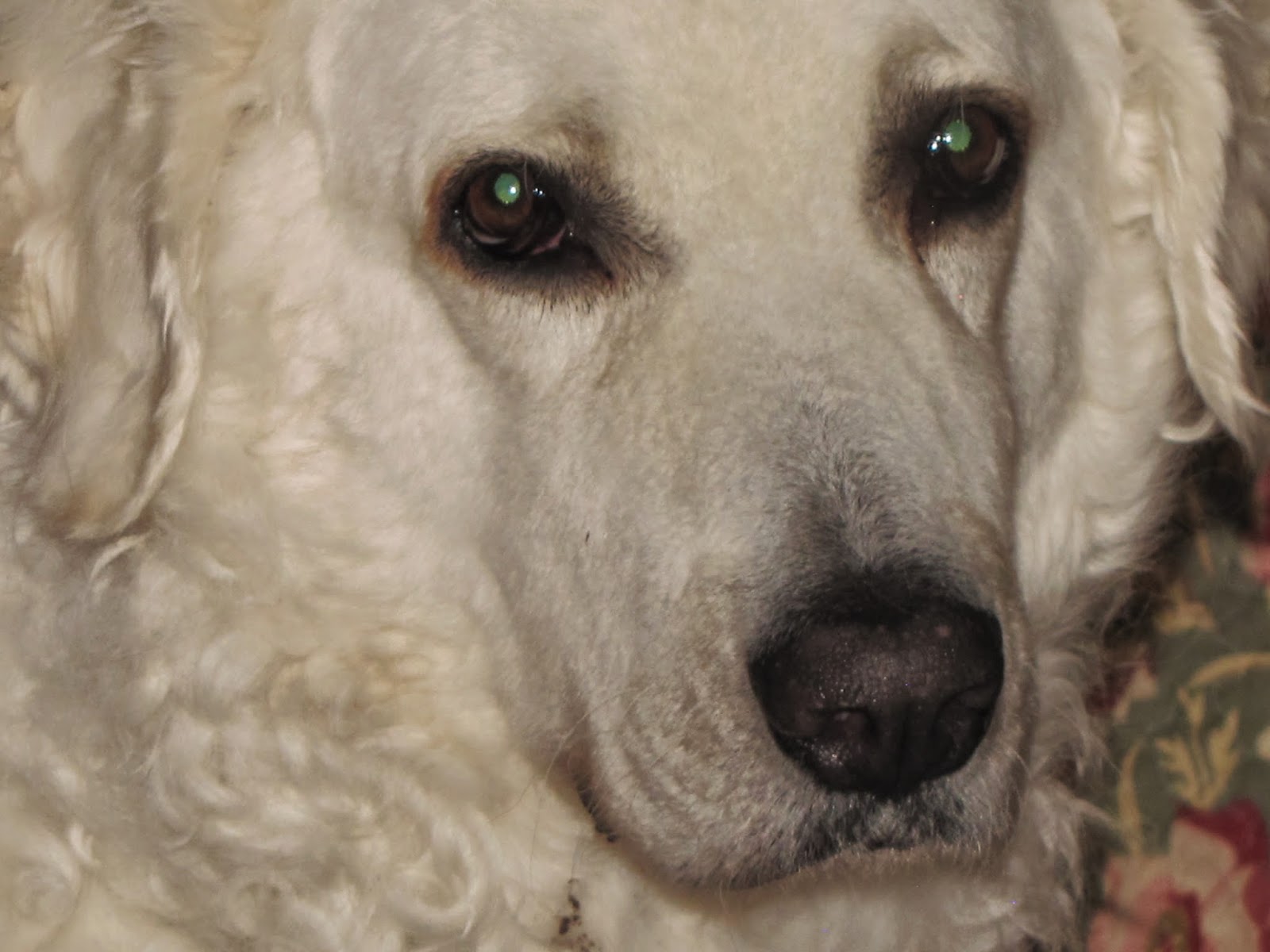 to be with us here at Blue Maples. She gives us her very best 'kissy face', and then promptly falls asleep as we speak. So this is her story.

Once we had found our beautiful forest retreat, our thoughts turned toward what kind of dog we should get. We already had Sir Renaissance Riley (aka Riley), our sweet, aging Bichon Frise. However, any walk in grass taller than ten inches quickly proved to be his undoing. Every seed, burr, or thatched thingy would get stuck in his fur, causing him to protest loudly and demand to be picked up and carried.  We took to calling him 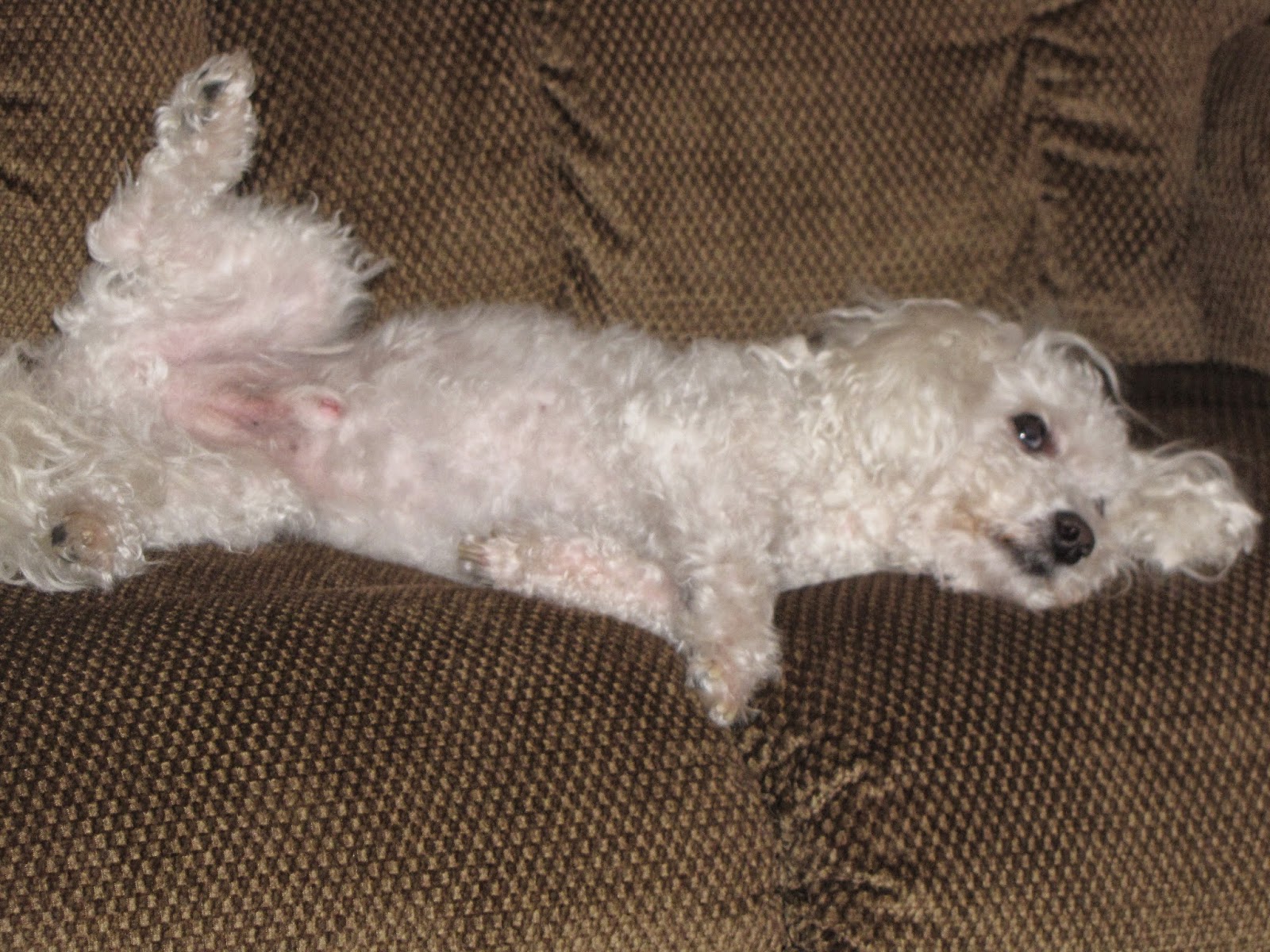 ‘Velcro dog’, and heeding his protestations, left him at home alone on the couch, basking in his favourite position.

As we spend considerable time in the forest, we agreed that a larger dog was necessary. A guardian-type dog would be ideal, but our son's allergies to short-haired dogs such as Labs and German Shepherds ruled many of the breeds out. Could we find a large dog that would be good with family, be fairly hypo-allergenic and be a guardian?  We read everything there was to read on dogs. We visited kennels and humane societies, and thought carefully about each breed.

One day, we came across the story of the Kuvaszok (plural), a guardian dog breed with a past history that filled us with wonder. Rumoured to be originally from ancient Sumeria, the breed had travelled  through the mountains into the area of Hungary. It soon became a favourite of peasants and farmers as it guarded their livestock with great care. The fur of the breed was also usable, and could be spun and knitted into warm mittens, hats and scarves. And strangest of all, the breed had huge webbed paws and loved to swim! 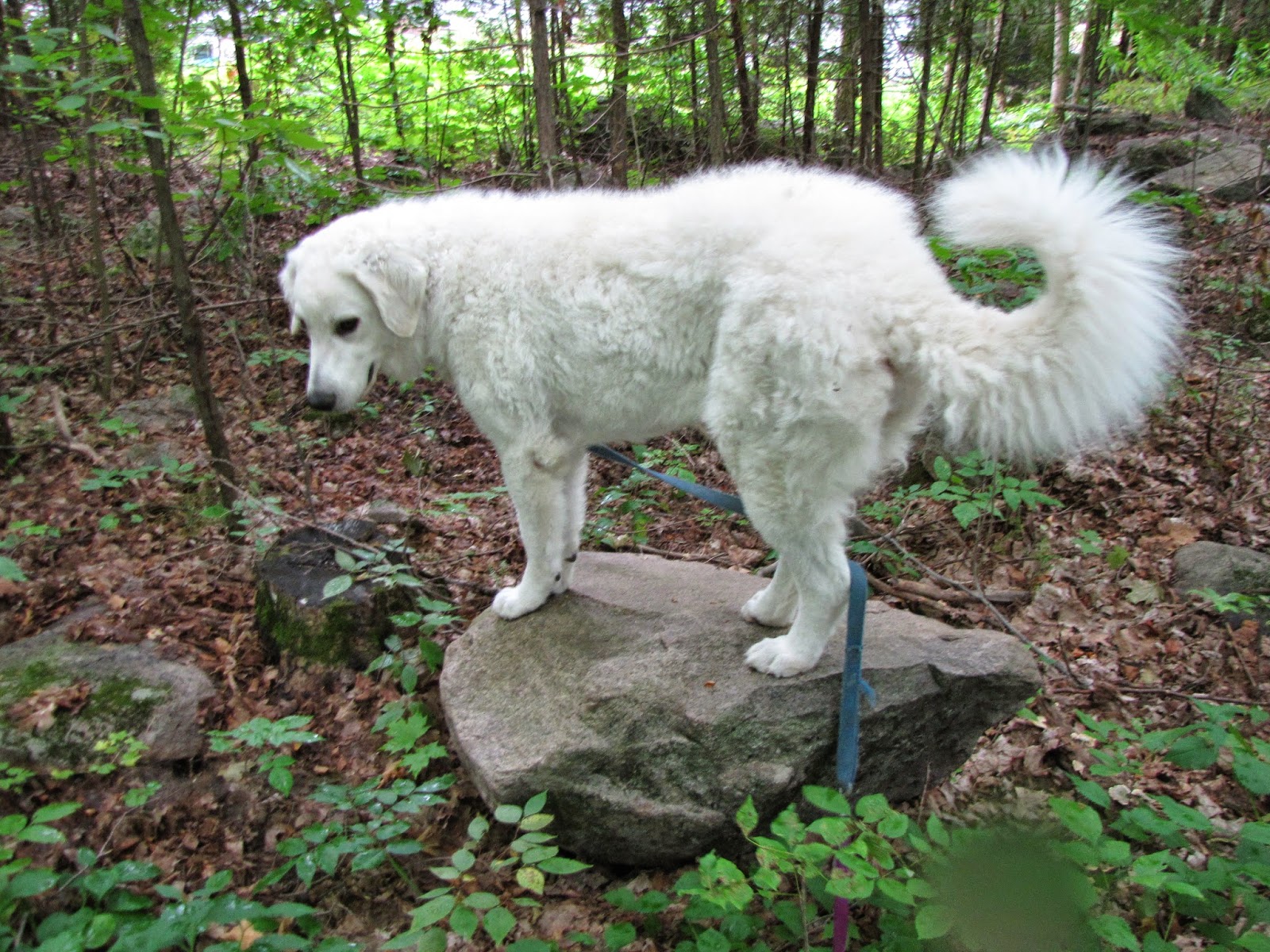 However, great misfortune was to befall the Kuvaszok. During World War II, invading armies plundered the areas of Hungary and Poland. So fierce were the Kuvaszok at defending their families and flocks, the invading armies sought them out and shot thousands of them, almost completely wiping out the breed.

One can only humbly marvel at such nobility in sacrifice by an animal for their master. When I learned of the fate of the Kuvaszok, my heart filled with great sadness. History is replete with the horrors that befall the innocent by humans devoid of virtue, and bent on control through destruction.

I was now determined to meet one of these noble dogs, and bring the breed to Blue Maples. As luck would have it, a nearby farmer raised alpacas and had a Kuvasz (singular). He allowed us a visit. While the 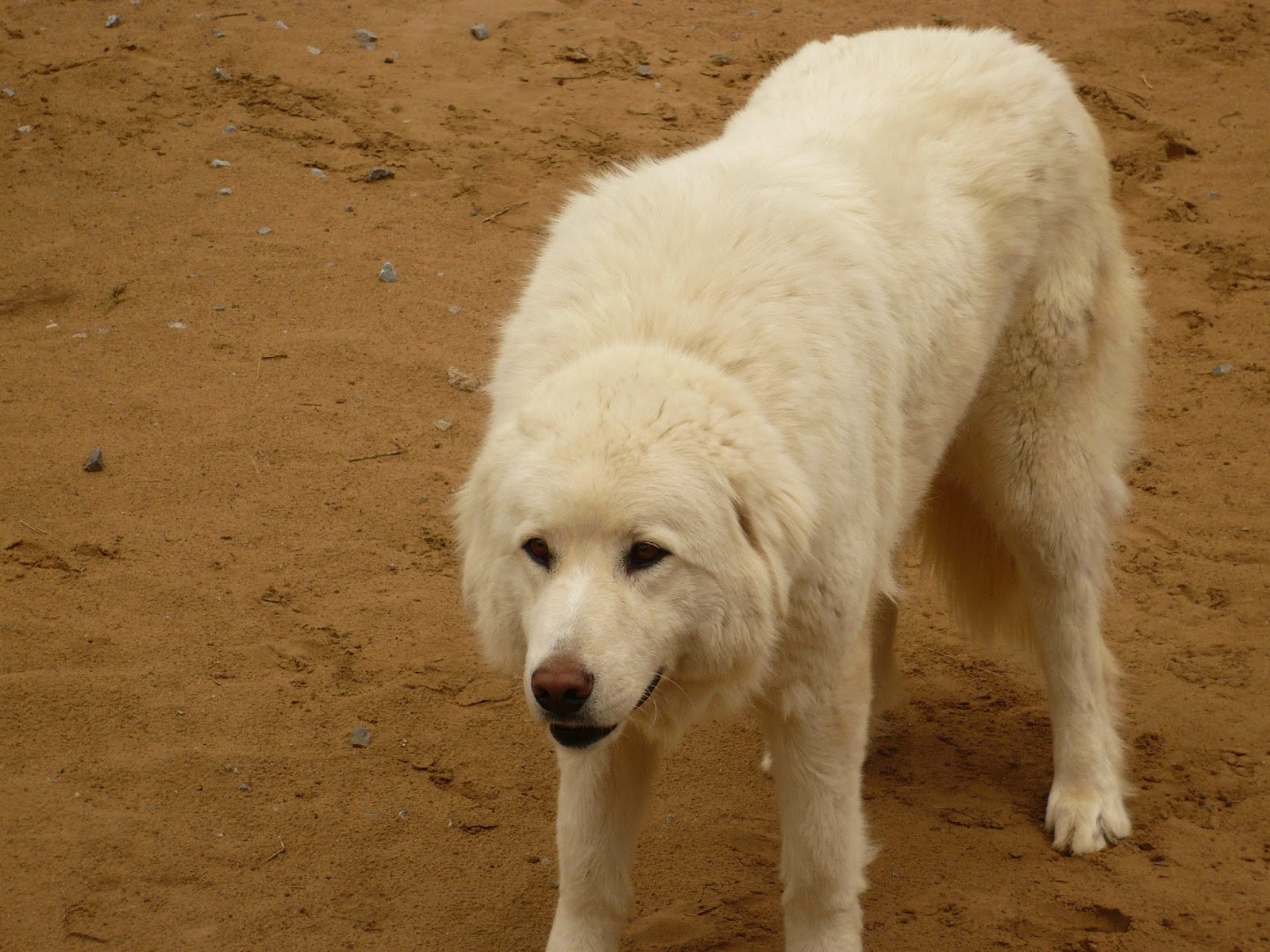 friendly alpacas headed gaily towards us from behind their corralled fence, the Kuvasz watched us intently from behind the same pen. Soon it began what could only be called a series of stealthy,strategic maneuvers as it moved toward us. Never taking its large, brown eyes off of us as we walked along the fence, the Kuvasz kept subtlety inserting itself between us and the alpacas.The dog never barked, but that steady gaze and purposeful movement left little doubt about who was in charge of this visit. Pointing at the Kuvasz, my son said simply, 'Mom, that's the one'.

Within a month, we had found a reputable breeder in Canada, ordered our puppy, and picked her up in June 2010. May we introduce you to our eight-week old Bella Layna of Huron Reg'd Kennels, just weighing in at twelve pounds! 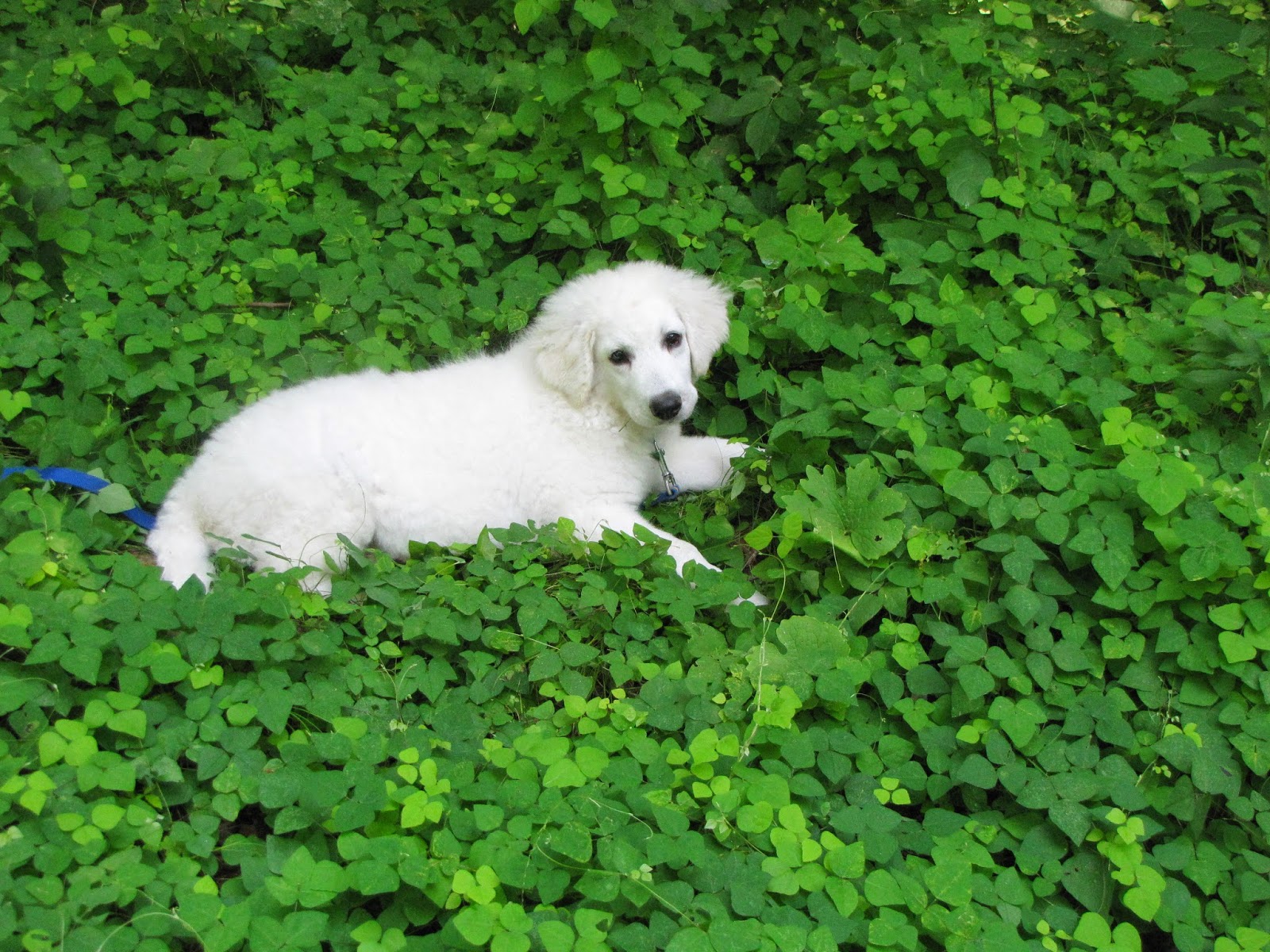 Little did we know that within two years, she would weigh-in at 140 pounds (63.50 kilograms), with the upper body and shoulder strength that would be the envy of many a hockey player!

Stay tuned for more postings on our lovely Layna, as we grew to understand more about this  intelligent dog breed, and the service this breed performs for humanity.
Posted by Unknown at 07:25 No comments: Links to this post